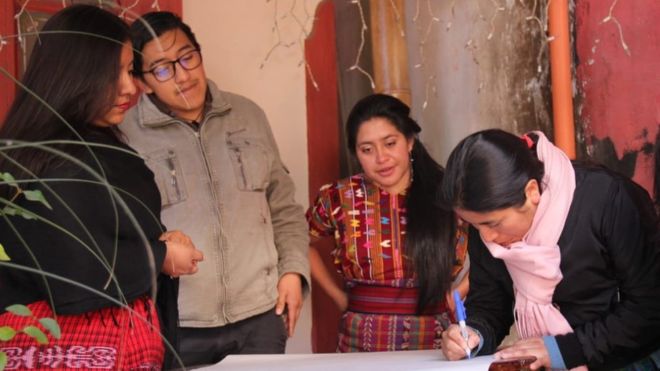 When Ericka Guadalupe Vásquez Flores began working as a translator for detained migrants and their lawyers in the United States, she could not stop thinking about her younger brother, Bryon.

Ms Vásquez spent hours taking long-distance phone calls from her home in the Guatemalan highlands translating to Spanish for migrants in Immigration and Customs Enforcement detention centres in the US who only spoke their indigenous language.

While most immigration lawyers speak Spanish and English, the many different native dialects found across Latin America often go overlooked by US authorities.

But Bryon was in one of those same detention facilities, fighting his case for four months before being deported.

A place where one loses hope

„My brother says in the detention centres, one loses hope, one loses faith,“ says Ms Vásquez of the freezing holding cells where Bryon was kept.

But he did have an advantage over many migrants Ms Vásquez works with: he spoke Spanish.

„I imagined the cases of these people who are living through the same things as him but don’t know how to speak Spanish.“

She is among a growing group of mostly Guatemalan women who translate for detained indigenous-speaking migrants.

That translation – the ability to communicate – can mean life or death for some detainees thrust into the US’s ever-changing labyrinth of asylum law.

The project, Promoters of Migrant Liberation, began in 2016, when co-founder Ana Gómez and an activist friend working with migrant aid organisations in US detention centres began hearing stories of indigenous Guatemalans who were detained for weeks, sometimes months unable to communicate.

There are 25 protected indigenous languages in Guatemala, the most common of which, Mam and Quiché, in turn have many different dialects.

The group began offering free translations to women, but as US President Donald Trump adopted his „zero tolerance“ policy and rolled out increasingly stringent rules for the detention of migrants, they soon expanded to increasingly help children and men as well.

The bond of a shared language

Ms Gómez says that hearing their language spoken after many months in detention can create an extremely strong connection straight away between the migrants and the translator.

They work with Guatemalans in three phases – right as they are detained, as they are preparing asylum cases, and as migrants leave detention.

In the calls, the translators often act as voices of home in the midst of fear and confusion, Ms Vásquez explains. She recalls talking to one Quiché-speaking woman who was in detention with her baby and who could not tell anyone for weeks that her son was sick.

„We don’t know who we’re speaking to. Maybe we hear the voice, understand their situation, but we’re never going to find out who it is,“ she says.

„So the sense of helping is a little deeper. Because we don’t know them, but we understand the case and are supporting them.“

Translation resources like the one the women offer are „woefully insufficient“ in courts and detention facilities, says Ruben Reyes, an Arizona-based immigration lawyer.

Mr Reyes has seen a surge of Central American migrant cases in the past two to three years as violence has spiked in Guatemala, Honduras and El Salvador. An estimated 540,000 people in Central America fled their homes in 2019.

In about 10 to 15% of cases, Mr Reyes says, the migrant he is working with does not speak English or Spanish. Most are from Guatemala, a country where nearly half of the population is indigenous.

For many of these migrants, a translator – the ability to communicate their cases, including credible fear or previous cases of torture or political prosecution – could be the difference between life and death.

„It does prove to be a real, debilitating factor against indigenous migrant speakers in immigration courts,“ Mr Reyes explains.

A shortage of translators and surge in such cases only further complicates the US immigration court system, which has been plagued for years by a backlog of thousands of cases.

Those waits grow all the more perilous as the Covid-19 pandemic strikes the US and migrant detention facilities. Recent reports show that facilities do not provide basic protective supplies like masks and disinfectant, which has resulted in growing outbreaks in detention, including positive cases among migrant children.

Mr Reyes says that migrants and their lawyers will in some cases waive their rights to a translator to expedite cases, or they may wait in limbo for a translator who may never come.

Ms Gómez and translators like Ms Vásquez hope to change those wait times by expanding the languages they translate and by working in more detention facilities.

Ms Vásquez’s brother Bryon is now back in Guatemala and she continues to translate the calls with his story acting as a reminder of what it is like to be on the other end of the line.

Ms Vásquez says her goal is to empower the migrants who are facing a foreign system in which the odds are stacked against them, regardless of whether they are eventually granted asylum in the US or not.

„We’re giving them the hope to continue fighting in their languages, from their belief system, their way of thinking and understanding.“