Early last September, in what in any other year would be considered the dwindling days of the Hamptons social season, the mega-gallery Pace opened a joint show of two Brazilian artists at its jewel-box gallery space in the heart of East Hampton Village. Inaugurated just two months prior in a bid to cater to collectors who had fled New York City, Pace’s newest addition to its globe-spanning empire was staging a show that promised to delve into “the ambiguity of abstraction” through five recent and historical sculptures by the celebrated Afro-Brazilian contemporary artist Sônia Gomes, nine new paintings by the less widely known Marina Perez Simão, and one collaborative work by both artists.

Gomes, who is in her early seventies, had just joined Pace’s roster earlier in the summer, but Simão, 41, wasn’t officially represented by the gallery at the time. The pair had spent time collaborating throughout the pandemic, building on a friendship that had formed through their shared gallery in São Paulo, the hugely influential Mendes Wood DM. So, with COVID-19 having sparked renewed willingness on the part of dealers to break with old models and experiment, Pace president and CEO Marc Glimcher took an unusual—though not unheard of—bet for a gallery the size of Pace and agreed to show Simão’s work without an official representation agreement.
Now, barely six months later, it’s clear: The bet paid off.

I’m embarrassed to admit I only first heard about Simão after a well-known art advisor texted me upon reading the latest issue of The Canvas, the art market newsletter I publish that seeks to offer a glimpse into how the often opaque art market really works. Responding to a point I had made about buzzy artists whose works are proving tantalizingly popular with a certain set of in-the-know collectors, but who still have pieces priced accessibly enough for us hoi polloi, she advised me to ask around about Simão as she had been hearing good things. Suffice to say, I’m glad I did.
Simão’s paintings offer an intriguing mix of figuration and abstraction, a blurring of genres that’s becoming increasingly popular in today’s figuration-obsessed market. Her latest series features abstracted landscapes, including shapes that defy easy classification and can leave viewers with a vague and uncertain sense of what they’re actually looking at—other than the certitude that it’s captivating. 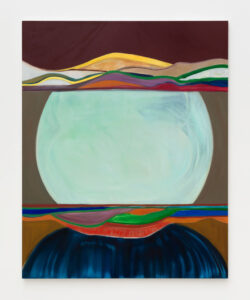 She has been showing with Mendes Wood DM since the gallery first opened its doors in 2010. Pedro Mendes, the gallery’s co-owner, had met her back in 2005 while she had been studying at the Beaux-Arts de Paris, and found himself immediately drawn to her work. “Marina has always had a way of capturing the fleeting moments in life and translating them onto canvas,” he told me over the phone from Costa Rica, where I was able to track him down at a meditation retreat. Though there has long been a tight-knit core of Brazilian collectors following Simão’s work through the years, Mendes said that it was only in late 2020, after an exhibition at the gallery’s satellite space in Brussels, that an international audience began to take notice of her talent. “Marina never wanted a big, splashy international debut,” he insisted. “She was always happy to have a long gestation period.” But following the Brussels show, interest in her work exploded. “Before we knew it, we had a 50-person-long waiting list for each painting,” he said. “It all just clicked.”
That show, a departure from her earlier, less colorful style, was the first in which Simão experimented seriously with the compositional patterns that allow viewers to recognize the sky, the horizon, and the Earth’s crust in her paintings. However, they were still imbued with a certain Kafkaesque sense of ambiguity that makes you question everything you’re seeing, and that Simão has always incorporated into her work.
Around the same time, Glimcher and his wife, Fairfax Dorn, spotted one of Simão’s paintings in Mendes Wood DM’s booth at an art fair. Admiring the deft use of light in her work, they bought a few paintings for their personal collection, igniting the spark that would eventually lead to the collaborative show with Gomes in East Hampton in September. There, Pace’s clients—or at least the ones with summer homes on Gin Lane—immediately took to the artist’s vibrant, boundless style. Rumored to have been priced between $6,000 and $35,000 depending on the size of the work in question, all nine paintings sold within days, a feat for an artist with little name recognition in the U.S. All of a sudden, interest began to pour in from Pace clients who hadn’t even seen the show in person.
“Museum board members, clients based in the Middle East, young collectors—Marina’s appeal has been incredibly far-reaching,” said Samanthe Rubell, a senior director at Pace who helped oversee the show in September, and who was recently promoted to co-lead Pace’s global sales team. “No matter who you are, you move through her paintings and discover these depths that inspire your imagination and awaken you. Her work can touch anyone.” 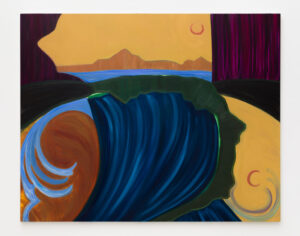 Erika Klauer, the portfolio manager and managing director at Jennison Associates, a leading investment management fund in New York, and a longtime collector and client of Pace, echoed that sentiment. Upon hearing she had bought a painting from the East Hampton show, I reached out to ask what motivated her to acquire a work by an artist of whom she had no prior knowledge. “The impact was immediate,” she answered. “Her exploration of the landscape draws you into the familiar. Whether it’s a moon rising, a sun setting, or a mountain pushing up towards the sky, her brushstrokes, use of color, and evolving shapes completely swept me in and caused me to dream about what’s possible in an imagined world.”
Of course, as the art market often amounts to no more than a loose game of gossipy Telephone, the ears of certain art world insiders perked up in the months following the show out east. It came as no surprise when, in mid-January, right as collectors were returning fresh-faced from their holiday ski trips and ready to refocus their attention on the market, Pace announced that Simão would officially be joining its roster ahead of a solo exhibition at its eight-floor flagship space in Chelsea this spring.
In that time, interest in Simão’s work on Artsy had also begun to skyrocket. Her work first appeared on Artsy in August 2020, but by the end of the year, the number of monthly inquiries on the site about her work had quadrupled. In January, the month her signing with Pace was announced, the number of users inquiring about her work on Artsy surged a whopping 440% month over month. And just three months into 2021, the number of inquiries about Simão’s work and the number of individual collectors inquiring about her work on the platform have already surpassed 2020’s totals.
Her solo debut with Pace is now officially open, and reactions have been overwhelmingly positive. Titled “Tudo é e não é,” in reference to a phrase coined by Brazilian novelist João Guimarães Rosa that translates to “Everything is and is not,” Simão’s new body of work reflects the evolution of her artistic practice while quarantining in Brazil this past year. Open until April 24th, the show features 22 paintings and 10 watercolors sporting the rich, deep blue and violet hues, paired with animated yellows and oranges, for which she’s become known over the past year.
It should come as no surprise that Simão’s work, with its tendency to pull the viewer into the painting, has found a seemingly insatiable audience during the pandemic, a time when most collectors have resorted to looking at art through a digital screen. “Especially as we all hopefully begin to emerge from the pandemic, Marina’s paintings, with their ability to emanate this duality of love and light and darkness and despair, have the ability to speak to us all,” Rubell reflected. 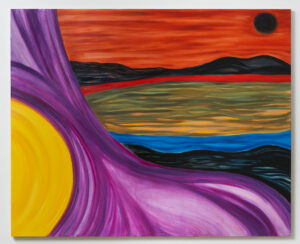 So, where will Simão’s market go from here?
For one thing, it appears the in-demand artist’s primary-market prices have nearly doubled within the past year. Works in her current show are said to be going for figures between $15,000 and $60,000, though savvy collectors might still be able to snag a small painting or watercolor for less if they’re lucky. With that being the case, it wouldn’t be surprising to see a few paintings begin to pop up at morning, afternoon, and online sales at the three major auction houses, perhaps even as early as next month in New York during the May sales. And in a promising sign that the audience for her work is expanding even further beyond South America, Europe, and the U.S., Mendes informed me of a soon-to-be-announced museum show being planned in China for the fall.
But perhaps most promising of all the signs of Simão’s potential staying power is that, as this column was going to print, word began to trickle out that by the end of its opening day, five of the paintings in the Pace show had already been acquired by museums, at least three of which are based in the U.S. And by the end of the first week, all 32 works in the show had sold. How’s that for a meteoric ascent?