Alma Thomas was born in the state of Georgia in the United States in 1892. At school she was a model student who shone in many subjects. The family later settled in Washington D.C in order for the gifted young Alma to live in a region which created more educational opportunities for African American youngsters.

After leaving school, the future artist went into teaching and this was an area which she would stay close to her heart for the rest of her life. Given the chance to attend Howard University, a historically black centre of learning, it was here Thomas met influential tutor and artist Loïs Mailou Jones. Urged to study art and experiment in painting, Thomas began an early exploration of the area of abstraction. After graduation with a degree in the subject, Thomas went back to teaching. 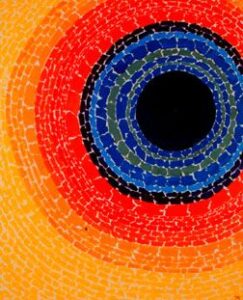 It was not until her retirement in 1960 that Thomas became a full-time artist. Inspired by the abstract expressionism and colour-field painters of the age, she began to direct her work in a similar area. Exhibiting her work in 1966 at Howard University, she began to develop the brightly coloured mosaic style for which she became famous. Taking inspiration from the moon landings at the end of the decade, her abstract style continued. It was nature however which motivated Thomas to paint many of her works. Remembering the rural landscape of her home state, she captured impressions of the seasons, flowers and the elements among other aspects of the natural world in her following work. Her resulting paintings received much praise from critics.

It was aged 81 that Thomas became the first African-American woman to have a solo exhibition at the Whitney Museum of American Art. The artist continued to work and exhibit her work for the following seven years until her death in 1978. While not overtly political in an age of civil rights activism, Alma Thomas, nevertheless made huge inroads for African American artists into an art world run by the exclusively white and male art establishment. 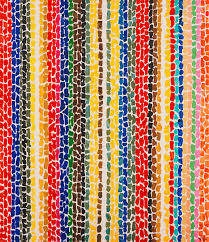