Ask an average person to name an Latin American woman artist, and they’ll most likely mention Frida Kahlo. There’s no disputing Kahlo’s place in the art-historical canon as a master of  Surrealism and self-portraiture. But even she confronted hurdles on her journey into history books and popular consciousness—including the flagrant marginalization she faced as both a female and Latin American artist.
While Kahlo’s practice has mostly transcended sexist readings, many other Latin American women artists haven’t been as fortunate. “Throughout art history, the people who’ve had the power to write dominant narratives decided to exclude women and art made in Latin America,” curator Cecilia Fajardo-Hill told Artsy. “It’s a form of segregation, and it is unacceptable.”
Fajardo-Hill is the co-curator, along with Andrea Giunta, of “Radical Women: Latin American Art, 1960–1985,” a sprawling show that began its tour at Los Angeles’s Hammer Museum and is currently on view at the Brooklyn Museum. It is only the second-ever large-scale American museum exhibition to spotlight Latin American female artists, but it marks a growing effort by curators and historians to assert their influence. “Talking about women who’ve been overlooked requires many exhibitions,” Fajardo-Hill continued. “This is the first of many that should happen.”
Below, we highlight 11 Latin American women artists (from “Radical Women”and beyond) whose work has influenced countless artists, but who’ve yet to receive recognition on par with their male peers. 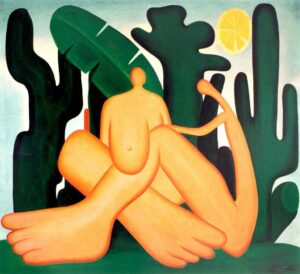 Tarsila do Amaral is Brazil’s most famous 20th-century artist, but until recently, her work received sparse attention outside of her home country. Last year, the Art Institute of Chicago became the very first United States institution to present a solo exhibition of the modernist painter’s work (it is now on view at New York’s Museum of Modern Art).
A member of the São Paulo bourgeoisie, do Amaral traveled to Paris in the 1920s, where she took lessons with great  Cubists like Fernand Léger and rubbed elbows with the likes of Pablo Picasso and Constantin Brancusi. She brought elements of their modernist paintings—flattened forms, fractured space, distorted bodies—back to Brazil, but made them her own by including content ignored by her European counterparts.
Do Amaral filled her canvases with vibrant scenes of Brazilian life, and the powerful, abundant bodies of female figures. These paintings inspired Brazil’s Anthropophagy movement, which prompted artists to define a new, uniquely Brazilian style by “cannibalizing” defining aspects of Western art. In the process, do Amaral’s practice helped shape her country’s postcolonial national identity. 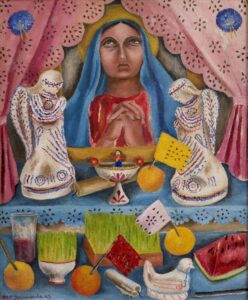 María Izquierdo was a single mother raising three children when her portraits and mystical, Surrealist paintings of interiors began to make waves in Mexico City in the 1930s. Previously, she’d taken classes at the capital’s National Fine Arts School, where renowned muralist Diego Rivera praised her early work. From then on, Izquierdo developed a practice that “rejected the political art that prevailed at the time,” as critic Holland Cotter has pointed out, and instead mingled elements of myth and Mexican popular culture with content related to her own identity, emotions, and subconscious. In 1930, she mounted a solo exhibition of her work in New York, making her the first Mexican female artist to do so (even before Kahlo).

Izquierdo’s popularity amongst Mexico City’s artistic elite began to wane, however, in the 1940s, when Rivera and fellow muralist

David Alfaro Siqueiros blocked her from receiving an important public mural commission for which she was a finalist (a rare coup for a woman artist at the time). The two men called her unqualified, and from then on, her career suffered. Overtime, her legacy became hazy, too, despite her influence on Surrealist and figurative painters—both her peers, and those who came after her. 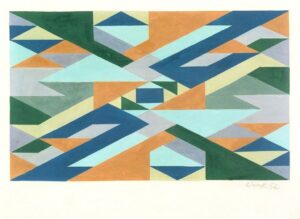 Lygia Clark was one of several artists in 1960s Brazil to pioneer interactive, immersive art—an attempt to break down the boundaries between art and life. Clark began her radical practice by exploring geometric abstraction during a time when realism was still the dominant motif in Rio de Janeiro. She gleaned early inspiration from European modernists like Paul Klee and Léger, but broke from their style by bringing the hard-edged forms of her paintings into three-dimensional space. Her canvases jutted out into the air, and she began making angular sculptures—her famous “Bichos (Critters)”—with the intention of being handled by viewers.

Neo-Concrete movement, which encouraged participation, experimentation, sensuality, and even political discourse within abstraction. Later, Clark gravitated towards film and performance art as a means to express her increasing desire to bring art and life closer together. Eventually, she began to focus less on artmaking, and more on her practice as a psychologist. Drawing from early observations of people playing with her sculptures, Clark developed methods in which patients interacted with objects as part of their healing process. 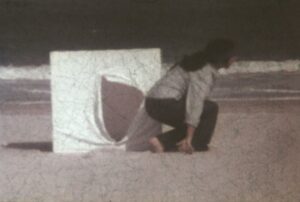 Like Clark, Lygia Pape laid the groundwork for countless experimental artists who aimed to close the gap between art and the world around it. Pape’s practice also grew from an initial interest in geometric abstraction, but quickly moved towards performance, installation, and film as a means to explore art’s social dimensions. She made unbound books that were meant to be held and rearranged, and choreographed group performances.
Her most famous of the latter, Divisor (1968), was activated by a large group of schoolchildren from a Rio de Janeiro favela. Upon sticking their heads through holes in a massive white sheet, their individual movements became restricted as they metamorphosed into a single organism. At the time, Brazil was ruled by a dictatorship, and Pape’s piece boldly commented on the limitations to personal freedoms imposed by the government.
Her films were equally experimental and audacious. In Eat Me (1975), she filmed a mouth up-close as it sucks on and grotesquely spits out various objects. The piece simultaneously references the “cannibalism” of do Amaral’s Anthropophagy movement, and the violence that increasingly plagued Brazil. 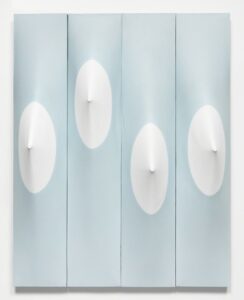 In the 1960s, Zilia Sánchez reinvented hard-edged, geometric abstraction by introducing shaped canvases and undulating forms evoking sensuality and eroticism. Born in Cuba, Sánchez was raised in the rocky years before the revolution and began her career as a painter and set designer for radical guerrilla theater groups. In 1964, she traveled to New York, where she began making shaped paintings, a practice she further developed in Puerto Rico after settling there in the early 1970s.
In Sánchez’s three-dimensional paintings, like the 1976 Topología Erótica, pointy areas of the canvas protrude into space, their resemblance to nipples enhanced by the pink, painted forms that encircle them. Throughout her career, Sánchez has also joined multiple canvases together; where they meet, openings recalling vulvas and other orifices appear. 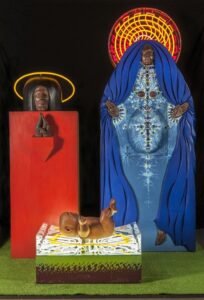 Marisol, born Maria Sol Escobar, was said to have received “more press and more visibility than  Andy Warhol” in the 1960s. But like many women artists, her influence was eventually eclipsed by her male counterparts. Born in Paris to a wealthy Venezuelan family, Marisol began spending time in New York in the 1960s, soaking up the emerging Pop art scene.
It wasn’t long before she was showing her playful, satirical sculptures that blended influences as wide-ranging as  Robert Rauschenberg’s assemblages and pre-Columbian folk art. The resulting totemic figures depicted both famous figures, like the Kennedys, and everyday families, while also incorporating elements molded from Marisol’s own body. In this way, she combined the personal and the political, hinting at the nascent feminist art movement.
Source: Artsy