Skip to content
One of the last paintings Frida Kahlo ever created was entitled ´Marxism will heal the sick` (1954).  Analysis of the painting, however, necessitates an understand of the artist herself, her motivation and personal context within an intriguing life and artistic career, culminating in this work which would be one of her final messages to the world. Frida Kahlo was born in 1907, into an early 20th century global era of political upheaval, bloody revolutionary uprisings and world war. In turn, the artist´s native country did not escape such instability and in 1910 Mexico was plunged into revolution. Kahlo´s childhood progressed therefore, amid a backdrop of armed rebellion against the suppression of the peasant classes, calls for land reforms and nationalization of resources. The rebels also rejected a European-style cultural template as the ideal, in favour of promoting indigenous Mexican culture. The political fervour and reclaiming of a more authentic national identity not only informed Kahlo´s own political perspective but, in turn, would have a major influence on her later artworks.

By the time Frida was twenty years old she had already joined the Mexican Communist Party and here her relationship with Diego Rivera, a painter of revolutionary murals and fellow member of the Party (later expelled), intensified. To describe Rivera as the more politically influential partner, citing the difference in age and experience, is to do Kahlo an intellectual disservice however. Kahlo was from a middle-class family and therefore benefited from an education including a wide range of resources and reading. The artist´s father also encouraged his daughter in gaining full advantage of an education only made possible by the recent admittance of girls to preparatory schools during the revolution. Here the teenage artist was heavily involved with a group of socialists known as the Cachuchas. This small society of young intellectuals were known not only for their adolescent pranks, but also for their sharing of ideas on history, philosophy and the political theorizing of Marx. 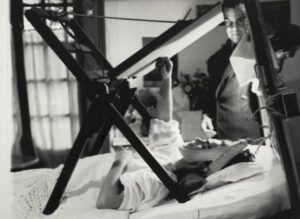 While the revolutionary events of the era, an informed education, in addition to politically motivated associates, all aided the formation of Kahlo’s Marxist ideals, it was perhaps her personal circumstances that created an extra dimension to her perspectives. As a child Kahlo had suffered from polio, contracting the disease at the age of six and as a result was forced to spend nine months in bed. As part of her recuperation, Kahlo fought back against both her disability and gendered expectations of the era by taking part in sports such as boxing, to strengthen the weakness created by her illness. The artist´s later only partial recovery from a catastrophic tram accident not only heavily impacted on her physically, but also aiding in forming her character and beliefs. Her ability to survive the tortuous aftermath of multiple devastating injuries emphasized her resilience in the face of extreme personal adversity. Both her pain and endurance were also often themes and motifs within many of her artworks, forming an empathetic link between Kahlo and all those who struggle and yet must fight to survive.

A metaphorical relationship between Kahlo´s own disability and her politics is clearly evident in her painting ´Marxism will heal the sick´. The artist presents a self-portrait in orthopaedic leather corset, as an embodiment of the suffering of the masses under the oppression of US capitalist forces. As the artist portrays herself as gently embraced by the reassuring, god-like hands of Marx however, she is reflected as able to throw away her crutches, promoting an evangelic-like message regarding the healing properties of Marxism for society. Kahlo´s use of symbolism and iconography communicate as if a political poster with rather simplistic reading. The divided ´good and evil´ composition of the canvas with use of opposing and familiar icons of war and peace, in addition to the saintly Marx and the strangling of the US eagle, are clearly illustrating a specific political agenda.  Even Kahlo´s dress and commonly adopted naïve, brightly coloured folk style of painting, reflect the promotion of indigenous arts embraced by the Mexican Renaissance movement, and is symbolic of a cultural identity freed by revolution.

Having spent decades producing many groundbreaking and what may be described as feminist self-portraits examining the physiological and often painful areas of her own life, from the disintegration of her marriage to her miscarriage, Kahlo`s move to a more overtly political stance was a form of resolution for the artist. As Kahlo´s commitment to the Communist Party grew, so did her wish to create a greater connection between her art and her political beliefs. The artist´s home had been an open house to many radical thinkers and her involvement with Trotsky, who sought refuge there, has been well documented. In the last days of her life she continued to be politically active, demonstrating against US imperialism in her wheelchair, despite the recent amputation of her leg and a deterioration in her general health. Kahlo died in 1954, leaving her painting unfinished. A rousing chorus of The International was sung at the painter´s funeral and her coffin was shrouded in the red flag with the Communist emblem of hammer and sickle.

Kahlo, as a woman who defied expectations of sex and sexual orientation, as a Mexican, as a survivor of great personal trauma and disability, knew only too well the meaning of the struggle to be free, an ideal she perceived was embedded in Marxism. Her political beliefs in fact, in addition to her art, her country and her lifelong endurance, defined the artist. Kahlo apparently finally found her own inner peace within the message of her last painting, in which a lifetime of personal pain and political struggle are united. Kahlo’s paintings are famous for their tears, but as her life ebbed away, the painter reportedly said of this work “For the first time, I am not crying any more”.